Godfrey is a 17yr old lad from Bakijjulula, the village in Mityana district where John’s dad lives, and where John is setting up the Vocational Training College (Nkuru BVTC). Education-wise he managed to complete his S4 exams, which are the equivalent to GCSE’s, but he didn’t continue on to A levels, due to being the oldest of seven children and his father couldn’t afford to keep him education.

He and his dad first found out about the proposed college when they saw building work being undertaken on site back in May 2017. Almost immediately they were knocking on John’s door asking if Godfrey could enroll in the college. If ever confirmation was required that there is a need for this college in the locality, there it was!

As the college wasn’t even built at that point, the normal enrolment processes certainly weren’t taking place. But rather than just note Godfrey’s interest and tell him to come back when the college was up and running, John gave him the opportunity to work alongside the construction team, learning the trades, getting lots of practical experience and building up his skill-base. 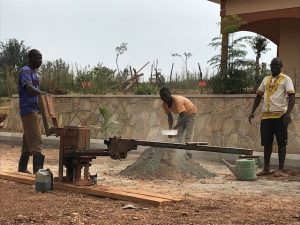 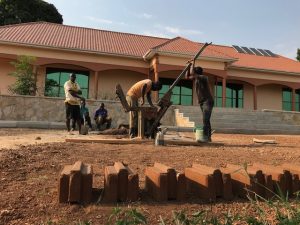 When the college opens in the next few weeks, Godfrey will get the chance to do the theory part of the construction course, so that he will be able to sit the exams to get the relevant qualifications. And because he will already have done many of the practical components, he will also have time to try out some of the other courses that will become available.

So, thanks to his enthusiasm, and John’s willingness to think ‘outside the box’, Nkuru BVTC student number 1 is well on his way to getting some useful qualifications, and a whole range of skills that will help him be employable for a long time to come. 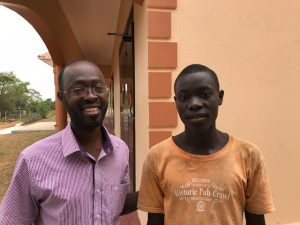