In February 2017, the first Dragon’s Den competition was held in Bakijjulula. Open to all microfinance scheme members, it was an opportunity for individuals to pitch an idea to the ‘dragons’ and hope to come away with a pot of money that they could use to make that idea a reality

The criteria for the competition were that the ideas had to be innovative, of benefit to the community, and not harmful to the environment. After two rounds of presentations and questioning, the winners were declared, one of which was Cosmos – a bee keeper.

Cosmos had asked for the money so that he could grow his small bee-keeping business: get more bee-hives, get proper protective clothing, and get the equipment to enable him to market his honey more widely

One year on, I went back to meet Cosmos and see how he has progressed. It was a very good visit!

With the help of the money Cosmos won, his honey business has gone from strength to strength. He now has 36 hives (he had 8 at the time of the competition), employs someone to help him with the business, has the protective clothing needed, and is selling his honey in Kampala. 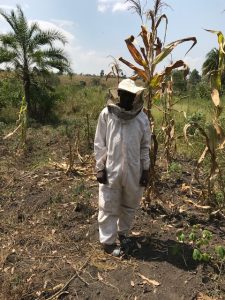 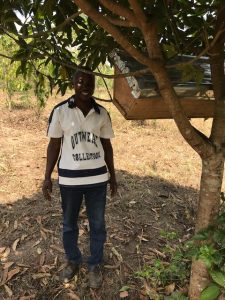 He has also trained some of his neighbours in bee-keeping, and he buys their honey from them to take to Kampala as well. So the neighbors now have an extra form of income, and Cosmos has extra honey to turn into a profit.

Local farmers are also happy as they are seeing better yields in their crops thanks to the presence of the bees, 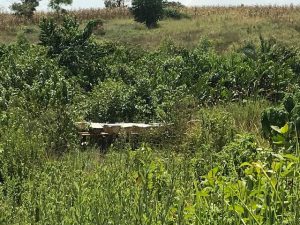 Cosmos was saying that one beehive produces 8 litres of honey over a 3 month period, so 24 litres in a year. He sells the honey at £6 per litre, and he has 36 beehives. The cost of packaging and transport etc is about £1 per litre.

I’ll let you do the maths, but suffice to say, Cosmos and his honey bees are not just helping the environment with regard to pollinating lots of plants and trees, but they are also helping bring an income to Cosmos, and to the others that he is working with to keep the Kampala honey market turning. 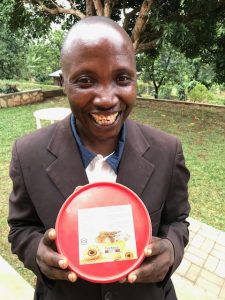 I wonder how long it will be before entrepreneurial Cosmos is getting his honey onto the international market?